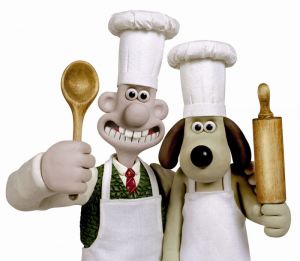 Christmas Day TV usually fails to deliver, so the return of Wallace and Gromit yesterday  was a well received treat. Thirteen years since their last TV adventure in A Close Shave, Wallace and Gromit: A Matter of Loaf and Death delivered on all levels, making it the most watched programme of the day with 14.25m viewers and a peak of 15.88m.

The 29 minute short mock murder mystery following the famous duo as they set up a new bakery business, was full of in-jokes and references to previous adventures to satisfy long term fans, with Gromit’s classic facial expressions at Wallace’s incompetence and stupidity stealing the limelight.

Whilst the plot followed the usual Wallace and Gromit formula, the laughs came thick and fast providing a much needed break from the now controversial Strictly Come Dancing and the Christmas Special plagued by another voting crisis following the well publicised  semi-final debacle.

The problem with Strictly’s seasonal outing, was whilst it was good Christmas viewing, it felt somewhat flat with Jill Halfpenny scooping the top prize unexpectedly. The show was however more enjoyable  than viewing rival Dancing on Ice which lacked any substance, clearly drafted in as a reaction to the very popular Strictly on the other side.

Doctor Who provided the same old classic Christmas entertainment with the formidable Cyberman returning alongside ‘other’ Doctor David Morrissey, the soaps served up their usual misery and the annual Top of the Pops revival added to the days festive line up.

Overall however with some fantastic films, the day more than made up for the dull Christmas Midsommer Murders and incredibly much publicised and disappointingly un-funny Gavin and Stacey on Christmas Eve.